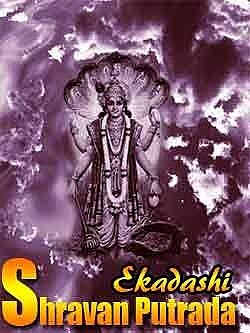 About this day, one day fasting is observed and praise is offered to the god (bhagawan) Vishnu (like other ekadashis) by both a married couple in particular, who don't to get a child for a very long time after marriage, to cause a male kid. This present day is particularly observed by Vaishnavas, followers of Vishnu.

A son is deemed completely vital in Hindu culture as he takes care of the parents in their old age in life and by offering shraddha (ancestor rites) makes sure well-being of his mother and father in the after-life. While each ekadashi is known for a separate name and is prescribed for certain objectives, the purpose of getting sons is so great that 2 Putrada ("giver of sons") ekadashi are dedicated to it. Rest of the goals don't enjoy this opportunity. Also it highlights the preference to get sons instead of girls.

Perform below puja and sadhana