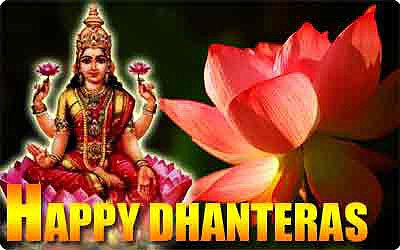 Dhanteras is a first day event of the huge and well-known Hindu festival, Diwali which is five-days long festival and observed in traditionally everywhere in the India. Dhanteras festival is celebrated on triodasi of the Krishna Paksha (the dark fortnight).

The interpretation of Dhanteras is wealth; at this day number of individuals make wish to the Devi Lakshmi to have wealthy life and wellness. They worship Goddess Lakshmi and Lord (bhagwan) Ganesha jointly. There's a custom of buying anything new as well as get it at home helping to make the meaning that Lakshmi came home. And the whole year Lakshmi will come to the home like today. Dhanteras embraces a unique significance for the business communities as they make traditional purchases of the expensive metals on this day.

Lakshmi Pooja on Dhanteras or Dhantrayodashi need to be executed during Pradosh Kaal that starts after sunset and approximately endures two hours and minutes.