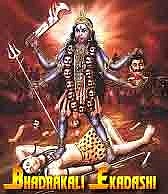 Bhadrakali Ekadasi is observed during on the eleventh day of the Krishna Paksha (dark fortnight) – waning phase of the moon – in the month of Jyeshta (May – June). Because the name indicates, it is devoted to Maata Mahakali and is mostly observed in Punjab, Haryana and Jammu and Kashmir In 2016, the date of Bhadrakali Ekadashi is June one.

It's thought that Maata Mahakali or Bhadra Kali made her divine attendance on earth to annihilate Adharma on the Bhadrakali Ekadashi day.

This Ekadasi is observed as Apara Ekadashi in other parts of India and by other communities. In Orissa, this Ekadasi is known as Jalakrida Ekadasi and is related to Lord (bhagwan) Jagannath.

It has to be noted that Bhadrakali Ekadashi has nothing to do with the Ekadasi fasting related to Lord (bhagwan) Vishnu (narayana).

Bhadrakali is a form of Mother Durga who is also called Shiddhitatri. She personifies the propitious power of time. The eleventh day of Krishna paksha (dark fortnight – the waning phase of moon) in the month of Jyeshtha is considered Her birthday. Therefore, Bhadrakali Ekadasi observed on this day. It is known as Jyeshta Ekadasi too. This amazing incarnation (avatar) points out the universal role of Bhadrakali and specific role of Mother Durga.

Mata Bhadrakali seems with baleful eyes, protruding tongue, and 4 arms carrying bloody sword in the upper left arm and severed heads of demons in the lower left arm. The top right arm looks in the mudra of providing bravery and the lower right arm in the mudra of conferring benefits. She adorns a garland of severed heads of demons and a belt of their dismembered arms. She is often shown in a divine lovemaking union with Lord shiva.

As Bhavtarini, the redeemer of the universe, She stands over the body Lord (bhagawan) shiva. In northern parts of India, Bhadrakali Ekadashi is deemed one of the most auspicious festivals according to shastra. It is said that Bhadrakali appeared on the eleventh day of Krishna paksha in Jyeshtha month to eliminate evil forces.

Perform/Get kali puja/sadhana/dikshaon Bhadra kali ekadashi and get below benefits....