Ambubachi Fair, also referred to as Ambubasi festival, is performed yearly in the monsoon in the Kamakhya Mata Temple (mandir) at Guwahati, Assam. In 2016, the beginning date of Ambubachi Mela is June 22nd and the event ends on June twenty fifth. The Ambubachi event relevant to the Tantric cult and is also often known as Kamkhya Devi Pooja. It is believed that Mother Kamakhya goes through her menstrual period during these days and therefore the temple remains closed for 3 days.

Ambubachi Fair is also known as Ameti or Tantric fertility festival and is a four-day mela (fair). It is closely associated with the Tantric Shakti cult prevalent in eastern parts of India and is famed due to the assembling of Tantric Sadhus from India and abroad. Some of these Tantrik Babas will seem before public only during these 4 days.

The Tantrik Sanyasins also attract the media and foreigners. And Tantric Babas performing numerous unique rituals and exercises are photographed and published in magazines and newspapers around the world. Devotees come from remote places to meet the Tantric Sadhus and take their blessings. Apart from this, the festival is noted for its rural craft fair.

It is widely believed that Mother Kamakhya goes through her yearly menstrual cycle during the Ambubachi days. The temple (mandir) remains closed for three days – the menstruation period.

People in huge numbers wait outside the temple (mandir) on the fourth day, when the temple will be opened. Sanyasins and Pandas from around the country assemble at the Kamakhya temple during this period.

Large number of devoees (upasak) make a mad rush when the temple (mandir) reopens to receive the unique ‘prasad’ which is small bits of cloth, which is supposedly moist with the menstrual fluid of Mother Kamakhya. It is considered highly auspicious and powerful. 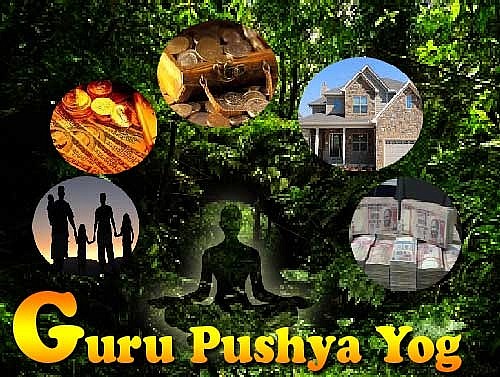 On the list of propitious nakshatra among constellations, one of the luck increasing star, one of the wealth giving star is Pusya. When Pushya nakshatra falls on Thursday or guruwaar or veerwaar then it is known as "guru pushya yoga. This yoga is so much essential that religious disciples, tantric and other scholars wait for this fortunate day whole the year. When this auspicious time take place in shukla paksha then for sure implausible works are completed. Guru pushya nakshatra means when pushya nakshtara falls on a Thursday. This yoga is also called guru pushya amrit yoga.

Info
My account
We are online
Tell a friend!
2018 © All right reserved.
Viewed
0
I Like
0
Search
Top
View cart